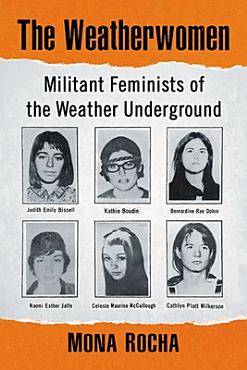 
Assertive, tough, and idealistic, the Weatherwomen--members of the Weather Underground Organization (WUO) from the late 1960s--were determined to stamp out sexism and social injustice. They asserted that militancy was necessary in the pursuit of a socialist revolution that would produce gender, racial, and class equality. This book excavates their long buried history and reclaims the voices of the Weatherwomen. The Weatherwomen's militant feminism had many facets. It criticized the role of women in the home, was concerned with the subordination of women to men, attacked the gender pay gap, and supported female bodily integrity. The Weatherwomen also refined their own feminist ideology into an intersectional one that would incorporate multiple identity perspectives beyond the white, American, middle-class perspective. In shaping a feminist vision for the WUO, the Weatherwomen dealt with sexism within their own organization and were dismissed by some feminist groups of the time as inauthentic. This work strives to recognize the WUO's militant feminist efforts, and the agency, autonomy, and empowerment of its female members, by concentrating on their actions and writings. 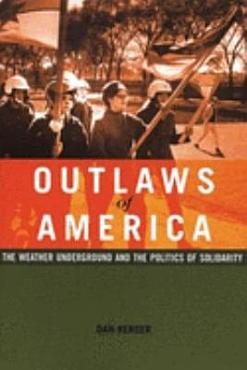 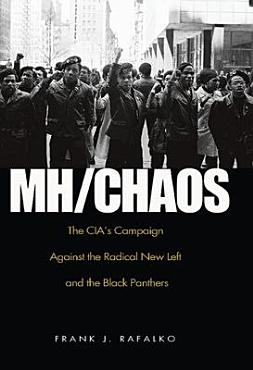 
Operation MH/CHAOS was the code name for a domestic espionage project conducted by the Central Intelligence Agency in the late1960s and early 1970s. MH/CHAOS: The CIA’s Campaign Against the Radical New Left and the Black Panters is an insider’s account of the CIA’s Counterintelligence Staff’s Special Operations Group first charged by Presidents Lyndon Johnson and later by Richard Nixon to find foreign intelligence, terrorist, organizations or government contacts, controlling or influencing Anti-Vietnam War activists or American black extremists protesting, bombing and carrying out other anti-government, unlawful or illegal activities in the United States. The operation was launched under Director of Central Intelligence Richard Helms, by chief of counter-intelligence, James Jesus Angleton, and headed by Richard Ober. The program's goal was to unmask possible foreign influences on the student antiwar movement. The "MH" designation signified that the program had a worldwide area of operations. When President Nixon came to office in 1969, all of the existing domestic surveillance activities were consolidated into Operation MH/CHAOS and used CIA stations abroad to report on antiwar activities of United States citizens traveling abroad, employing methods such as physical surveillance and electronic eavesdropping, utilizing "liaison services" in maintaining such surveillance. The operations were later expanded to include 60 officers. In 1969, following the expansion, the operation began developing its own network of informants for the purposes of infiltrating various foreign antiwar groups located in foreign countries that might have ties to domestic groups. Eventually, CIA officers expanded the program to include other leftist or counter-cultural groups with no discernible connection to Vietnam, such as groups operating within the women's liberation movement, including Students for a Democratic Society, the Black Panther Party and Women Strike for Peace. Also targeted was the Israeli embassy, and domestic Jewish groups such as the B'nai B'ritht. As a result of the Watergate break-in, involving two former CIA officers, Operation MH/CHAOS was discontinued. The secret nature of the program was exposed by Seymour Hersh in the New York Times on December 22, 1974. The following year, further details were revealed during Representative Bella Abzug's House Subcommittee on Government Information and individual Rights. The government, in response to the revelations, launched the Commission on CIA Activities Within the United States (The Rockefeller Commission), lead by then Vice President Nelson Rockefeller, to investigate the depth of the surveillance. In MH/CHOAS, the author, who is a former CIA officer, refutes the charges made by the New York Times and the Washington Post at the time that this domestic spying program first made headlines, and takes issue with conclusions of the Rockefeller Commission and the Church Committee. He relates how the Special Operations Group began, was staffed and how it was transformed into an anti-terrorist unit before it ceased operation. Rafalko details the information that Special Operations Group collected against the New Left and Black extremists and makes the case that the MHCHAOS program was justified, why the CIA was the logical agency to conduct the collection, and the consequences suffered later by American counterintelligence because of these investigations. 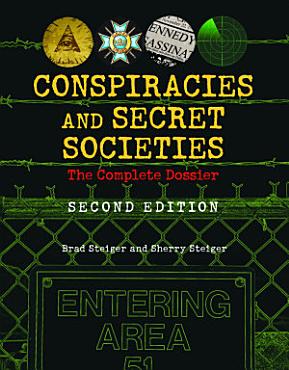 
Startling allegations. Suppressed evidence. Missing witnesses. Assassinations. Cover-ups and threats. Documented connections to even deeper intrigue. Allusions to the New World Order. Coincidences? Too many to be mere coincidence? American history is replete with warnings of hidden plots by the Illuminati, the Freemasons, the Zionists, the Roman Catholics, the Communists, World Bankers, the Secret Government, and Extra-Terrestrial Invaders, to name a few. Separating fact from fiction, this compelling work provides gripping details and presents the information without bias, including hundreds of individuals, organizations, and events where official claims and standard explanations of actions and events remain shrouded in mystery. Conspiracies and Secret Societies: The Complete Dossier examines the most common subjects among conspiracy theorists, from historical topics such as the true relationship between Jesus and Mary Magdalene, the Roswell UFO crash, and the assassinations of John F. Kennedy and Martin Luther King Jr. to more current issues such as the death of Princess Diana, FEMA’s response following hurricane Katrina, and the recent earthquake and tsunami in Japan. 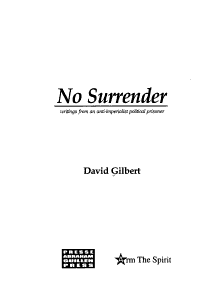 
A founder of Columbia University SDS, and a veteran of the Civil Rights and anti-Vietnam War Movements, David Gilbert joined the Weather Underground Organization in the late ­60's. After more than 10 years of clandestine resistance, he was captured in the course of an armed action in 1981. Gilbert has been a revolutionary political prisoner for 22 years, continuing his work as an AIDs activist, and author from behind the walls. This first collection of David Gilbert's prison writings is a unique contribution to our understanding of the most ambitious and audacious attempts by white anti-imperialists to build an underground movement "within the belly of the beast." With unsparing honesty (and unfailing humor), he discusses the errors and successes of the WUO and their allies; the pitfalls of racism, sexism and ego in revolutionary organizations; and the possibilities and perils facing today's growing anti-imperialist resistance. Includes forewords by political prisoners Marilyn Buck and Sundiata Acoli. "This book stands alone in the growing number of books about the 1960s, the anti-Vietnam War Movement, and the Weather Underground Organization because of David's willingness to own it and analyze it. His discussion of the strength's and weaknesses of this history, the role of armed struggle, the rise of terrorism, the continued aggression of the U.S. government speak directly to the concerns of everyone working for justice anywhere. David's discussion of these topics is freer, more alive, and more honest than any I have read. This book should stimulate learning from our political prisoners, but more importantly it challenges us to work to free them, and in doing so take the best of our history forward." [Susan Rosenberg, former U.S. political prisoner] "David Gilbert is a warrior in the most profound sense of the term. Imbued with a near-crystalline clarity of principle, the indomitable courage to live his life in accordance with the values he holds true, and, most importantly, his every action guided by the immensity of his love for the wretched of this earth, he is truly an inspiration. Predictably, given the strength of Gilbert's character, his writings are offered as tools -- nay, WEAPONS -- in the ongoing struggle for liberation. They are thus of incalculable value to each of us who aspires to the attainment of freedom, justice and dignity for ALL people." [Ward Churchill 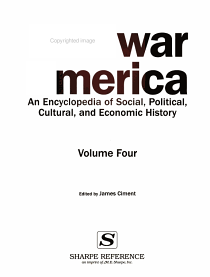 
Alphabetically arranged entries provide coverage of the diplomatic, economic, political, and cultural events in the United States from the outbreak of the Cold War to the rise of the United States as the last remaining superpower. 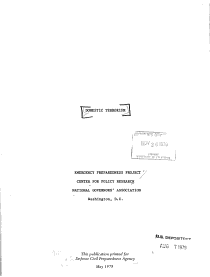 
This report reviews the definitions of terrorism as well as international and domestic trends in terrorism, identifies terrorist groups currently active in the United States, and examines State and Federal antiterrorism legislation. There are at least 15 active terrorist groups operating domestically, based in East and West Coast urban areas. They have strong international links and have become increasingly sophisticated in their use of weaponry and choice of targets. An emerging concern is that the new target of terrorists may be vital industries, such as utilities, petrochemical producers, nuclear power plants, and public transportation. Only 16 States were found to have enacted statutes that prohibit 'terrorist' threats and acts; of these, 12 prosecute activities causing general civilian disruption. The Federal Criminal Code was found to have no specific prohibition against terrorist acts and threats; however, a multitude of Federal laws, both substantive and procedural, may be used to apprehend and prosecute suspected terrorists. Efforts should be made to examine State governments' capabilities in dealing with disruptive terrorist incidents, and to inventory Federal government resources available in each State. The review should determine the recent incident and future potential of terrorist activity, the governor's statutory authority to declare a state of emergency, the role of a comprehensive emergency manager, law enforcement ability to gather adequate intelligence about terrorist groups, and State criminal code provisions for prosecution of terrorists. Appendixes contain background information regarding State disaster/emergency acts, footnotes for the chart of gubernatorial and State disaster/emergency acts, the Council of State Governments' example State Disaster Act of 1972 and supplements, the Immigration and Nationality Act of 1952, the Federal Aviation Act of 1958, and the U.S. Code on Insurrection. Tabular data, an index, and a bibliography of over 80 references are also provided. 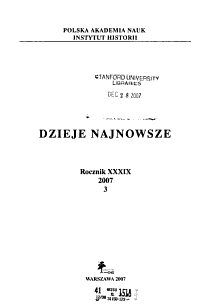 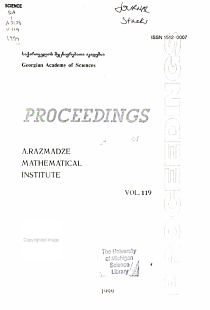