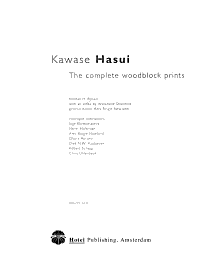 
Considered one of the most important Japanese landscape artists of the 20th century, his prints are the modern continuations of the unforgettable works by Hiroshige and Hokusai the 19th century masters of this genre. This convenient and attractive catalogue is an indispensable tool for collectors, scholars and dealers. 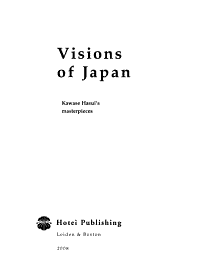 
A selection of one hundred masterpieces by Kawase Hasui (1883-1957), one of the most important Japanese landscape artists of the twentieth century. Large full colour illustrations show the enormous variety of snow, moon and rain scenes for which Hasui became famous. Introduction to Kawase Hasui by Ken Brown. (See also our publication 'Kawase Hasui The complete woodblock prints', 2003). Kawase Hasui (1883-1957) is considered one of the most important Japanese landscape artists of the 20th century. His prints, produced under the guidance and stern eye of his publisher, Watanabe Shôzaburô, are the modern continuation of the unforgettable works by Hiroshige and Hokusai, the 19th-century masters of this genre. As none other, he could evoke Japan of the eventful interwar period. Hasui's work enjoyed huge popularity from his very first print of 1918. In contrast to his illustrious 19th-century predecessors, his work was immediately successful in the rest of the world. His publisher, Watanabe Shôzaburô, recognised the enormous potential of the American market, which resulted in Hasui's prints fetching high prices at auctions in New York as early as the 1920s. After the Second World War, his prints were highly desired and sought after collectible items among the American occupying forces in Japan. Hasui's work has always been greatly appreciated in Japan: He was acknowledged as a 'Living National Treasure' in 1956. 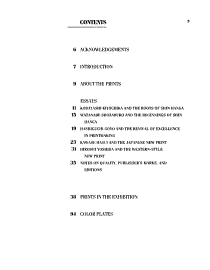 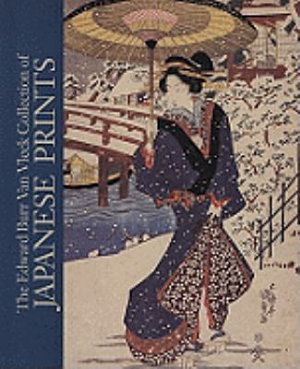 
The Van Vleck collection of Japanese woodblock prints is one of the Elvehjem Museum of Art’s (now the Chazen Museum of Art) most important collections of more than 3700 prints collected by Van Vleck between 1910 and 1943, including the prints that Frank Lloyd Wright collected in Japan in the 1920s. This copiously illustrated catalog is the culmination of several years of intensive study and documentation, and is the first step in making this impressive collection accessible to museum visitors and scholars. Distributed for the Chazen Museum of Art, University of Wisconsin–Madison 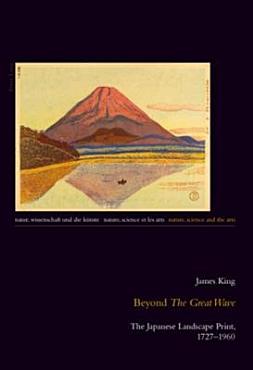 
The Japanese landscape print has had a tremendous influence on Western art of the nineteenth and twentieth centuries. In Japan and in the West it is often seen as the dominant form in Ukiyo-e, pictures from the floating world. And yet for all its importance, it is a genre whose history has never been written. Beyond "The Great Wave" is a survey or overview for all those interested in discovering the inner dynamics of one of art history's most remarkable achievements. However, it is also a quest narrative, in which landscapes and notions of Japan as a homeland are intertwined and interconnected. Although there has never been a book-length study of the Japanese landscape print in either Japanese or English, a great deal has been written about the two giants of the genre, Hokusai and Hiroshige. From what traditions did these two nineteenth-century artists emerge? Who were their predecessors? What influence, if any, did they have on other Ukiyo-e artists? Can their influence be seen in the "shin-hanga" and "sosaku-hanga" artists of the twentieth century? This book addresses these issues, but it also looks at a number of other factors, such as the growth of tourism in nineteenth-century Japan, necessary for understanding this genre." 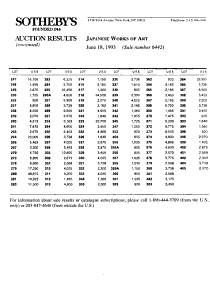